Living at Tallis House in Waltham Abbey, Essex, for two years now, Stephen Church, takes part in most of the organised activities and outings, but for the past few months, Stephen has become even more outgoing by reigniting his passion for food and joining the Tallis House catering staff in the kitchen.

Stephen has spent his entire career in the catering industry and various professional kitchens. Assisting Tallis House cooks, Mandy and Harry, to prepare meals for residents on a daily basis has given Stephen a real sense purpose at Tallis House. Giving Stephen the opportunity to help and practise his skills has been essential for his happiness and wellbeing.

Even with a lifetime’s experience of working with food, after being away from the utensils for a while, Stephen initially lacked confidence to join the team. But with gentle encouragement from the whole team, Stephen’s determination was lifted and he put on his apron and got stuck in.

Stephen helps in the kitchen every afternoon preparing sandwiches. He is really thankful to be supported by the Tallis House team to help in the kitchen and he is enjoying working within a team to prepare food once again. Stephen said, "It’s just like the old times. I am very much supported and I love working with Mandy and Harry.”

"Stephen Church’s Story as a Chef”

Stephen said when he left school at the age of 16 and started his training in renowned Kettner's French Restaurant in Soho, London, for 4 years (now known as Kettner’s Townhouse).

After completing his apprenticeship programme, Stephen went to work in British Petroleum Head Office as a chef and he worked there for more than 20 years.

After a BP buyout by another company, Stephen was made redundant and so joined Fishmongers Hall at London Bridge and worked there for 4 years. He said that he cooked for Royalty on several occasions.

Stephen also enjoyed working for retailer, John Lewis, and as a care home chef, so he really is a perfect fit for the Tallis House kitchen. Following Stephen’s retirement, he became a private caterer, supplying food for all special occasions, such as birthdays and weddings with the help of his wife. 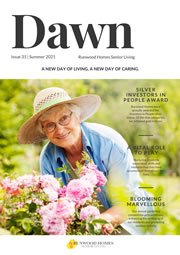